Land ho. Greenland. We glimpse mountains that peek through low-lying fog with clouds above as the ship slowly approaches the coast. Scoresby Sound is one of the largest and longest fjord systems in the world. My telephoto lens is working overtime to focus closer on the snow and glacier covered peaks. Before entering the Sound, we took measurements at the mouth by way of moorings and CTD stations. Only then our journey into Scoresby Sound began. We determined how much warm water enters the Sound and how it travels to reach the melting glaciers that produce the many icebergs we saw.

Greenland barely visible through the fog as we approach the mouth of the sound from the Demark Strait. Photo: Dragonfly Leathrum 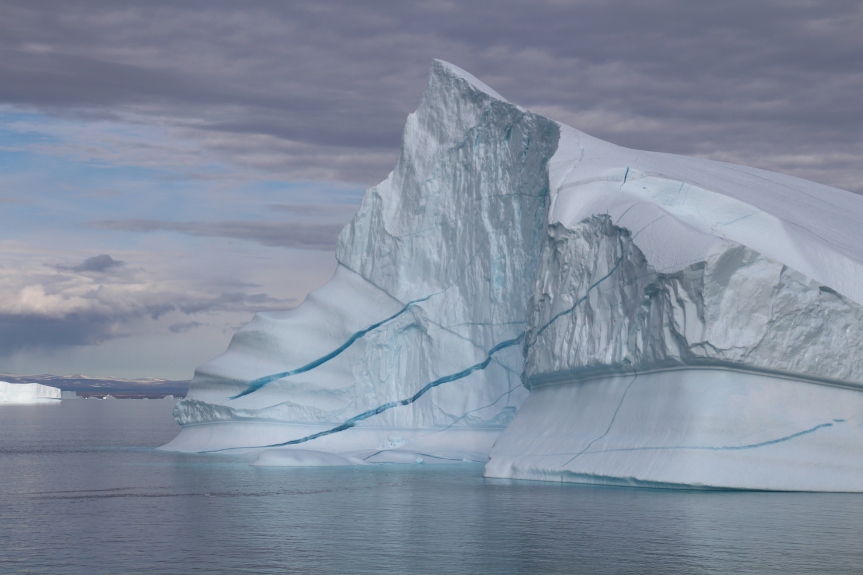 My favorite iceberg of the many I saw. I really like the bright blue ice intersecting the white. Photo: Dragonfly Leathrum

At first, we could see a few icebergs in the distance. I took photos of every one that passed. I would try to go back to my cabin to process photos and another even more interesting iceberg would appear just outside the porthole of my cabin. The mountains along the Sound appeared wild and unspoiled. Some peaks were covered by snow, some were not, some had waterfalls, others were dry. It is August after all, the height of summer with 20 hours of sunlight. My favorite feature, besides the distinct layers of sediment, were the many small and steep glaciers that had found their way to the Sound and the paths they create by carving the mountains. The passage of time is easily read here.

A tidewater glacier making its way around an obstacle shaping the landscape. Photo: Dragonfly Leathrum

I’m intrigued by the changing colors of the ocean from almost black to bright blue. The color morphs each day and even during the day as we change our location and clouds filter the light. About 200 miles into Scoresby Sound we entered into the Nordvest Fjord. One day the water was still, almost glassy. The ocean reflected mountains and icebergs alike which created an image of peace, tranquility, and awe. The next moment winds picked up, creating waves that smashed into icebergs. Another day the water looked a deep turquoise and later changed with the sun to a bright turquoise I have not seen before. Pictures taken this day look like we were in the Tropics instead of the Arctic.

A bright day aboard the ship in the Nordvest Fjord with a turquoise sea. Photo: Dragonfly Leathrum

Despite the distracting, dramatic landscape serious work was to be done. Mapping the rugged seafloor, Ellen’s instrument revealed a new science to me. She discovered that many of the islands in front of us were in the wrong place on the maps we had. I learnt a new word, “bathymetry” for this science that Ellen Werner of the University of Munich explains in daily meetings. I always look forward to her segment and watch her slowly evolving maps with new discoveries. Also, in our nightly meetings the scientists give short talks about their current work at home, because not all students work on Greenland Oceanography. They even let me give a talk about my artwork. No graphs or charts in my power point, folks. 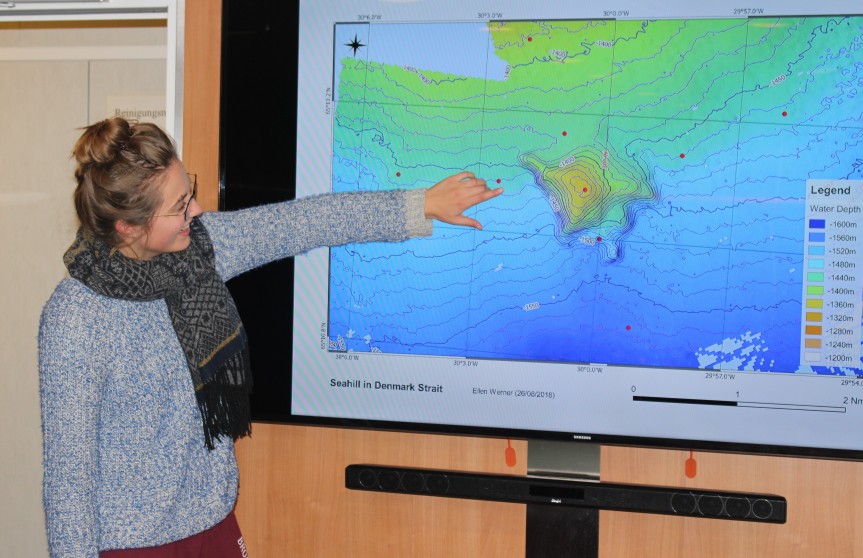 My seasickness retreated and I feel more surefooted on the ship. I am conquering my fear of heights as I get more comfortable standing closer to the ship’s railings when taking photos. Calmer seas also allowed me to paint again:

Watercolor and colored pencil of an iceberg in the Scoresby Sound. 24cm x 17 cm by Dragonfly Leathrum

7 thoughts on “So much beauty in the world”